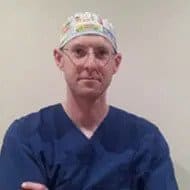 Jon-Paul was born and raised in Wales.  He graduated in 1996 from Bristol Medical School in the UK having been awarded his MB ChB.  He completed his residency and general surgical training in hospitals throughout the South West of England, following which he successfully completed his examination and was awarded his MRCS (Membership of the Royal College of Surgeons).

He then undertook a year’s Fellowship at the Royal Brisbane and Women’s Hospital and then made a decision to remain here in Queensland!